Tesla stockholders have had a wild ride since 2010, when the stock went public. Elon Musk’s ‘bet the company’ growth strategies have led to high stress situations for both his employees and stockholders that have, to this point, led to excellent financial outcomes.

The past month and a half, however, has been wild by even Tesla standards.  The stories have come so fast that it’s difficult to even keep track of what has happened.  The net result, however, is that both Tesla’s reputation and its perceived growth have been damaged due to Musk sacrificing his own mental health and that of his employees. 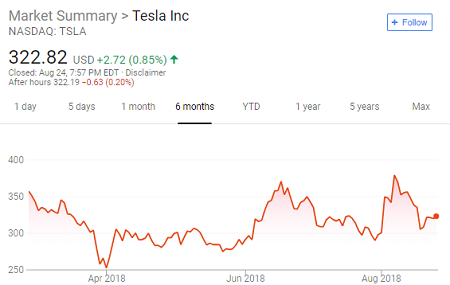 It all started on July 12th, when a report surfaced that three Tesla employees were ordered to walk through raw sewage as they tried to meet the Model 3 ramp-up.  The report also alleged that employees were forced to work 12-16 hour shifts and provided free Red Bull to make it through the days.  Although the story was sensational, it fed into the narrative that Tesla was pushing their workers to unhealthy extremes to hit the July 1st Model 3 production projections.

A week later, Tesla accused a disgruntled employee of “sabotaging operations” at the company, including changing the manufacturing system programming code and stealing data.  This employee turned out to be Martin Tripp, a whistleblower who had released images of damaged batteries used in vehicles. Since then, he has released the specific VIN numbers of vehicles that contain those batteries.

These accusations led to examinations of the cars pushed out of the factory to see if they were in fact constructed shoddily.  Just this week, UBS rated the build quality as poor, and Business Insider reported that 86% of all cars going through the rushed process required rework before they could be delivered.

Tesla met their production quota.  But was all of this worth it?

It certainly doesn’t look like it so far.  The CEO had a public meltdown which he argued was due to the long hours.  He’s lost several high-profile employees, which are rumored to be leaving in part due to the frenetic pace at Tesla.  And after all of the overwork he’s subjected his employees to, the company’s stock isn’t much higher than it was in early April, when the production targets were very much under question.

All companies face deadlines.  Sometimes, employees need to put in more hours than expecting, racing to hit a production quota, service deadline or unexpected demand.  But when you make this pace the baseline of your company, you sacrifice long-term gain for short-term profit.

Everyone makes mistakes when they’re overworked.  People also stop enjoying their jobs – and if you have motivated, talented people, they won’t have any trouble finding another one where their physical and mental wellbeing is respected.  Finally, overwork can also wreck families, ripping at the social fabric that customers are more attentive to than ever.

This is why, when executives or managers recommend squeezing more productivity out of a stretched workforce, it’s important for someone to stand up and ask “when will this end, and how will we repair the damage we’ve done over that time period?”  If there’s any question about the damage it can do, Tesla’s example stands ready.

To learn how WingSwept’s CMTS:HR platform can help lighten the stress on employees conducting HR investigations by ensuring a consistent, efficient process, call us at 855-636-5361 or email us at Team_CMTSHR@CMTSHR.com.