Even with the benefit of hindsight, sometimes there aren’t any facts that would have given away a ‘bad apple’ in the company.  Some people hide their negative traits or bad intent really well; others are perfectly good employees until a life or work event happens. 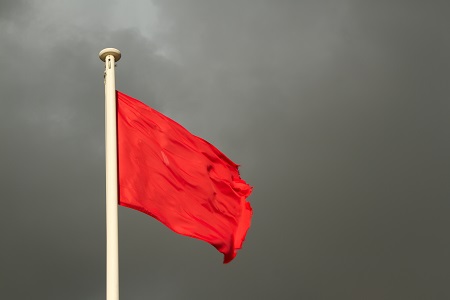 But sometimes hindsight does reveal some red flags that weren’t noticed until after the company landed in the middle of investigation for serious misconduct.  By proactively looking for those red flags, it might be possible to prevent the bad behavior before it even happens.  At the very least, you might be able to address the behavior before it spills over into larger issues within the team or division.  Here are three red flags that small problems might turn into bigger ones if left unaddressed.

An employee is in the Fraud Triangle

The Fraud Triangle outlines three factors that are typically present when a person commits financial fraud.  The first two factors are well known – the employee faces pressure that can be resolved with money, and believes they have the opportunity to commit the fraud without it being noticed.

However, many people assume that the fraudster knows what they’re doing is morally wrong.  In reality, employees are much more likely to commit fraud if they believe their circumstance makes it morally acceptable to steal money.  Examples include a need to care for a family, or an employer they believe has wronged them in some way.  That’s why it’s important to counter this rationalization with ethics education – and why employees that are disgruntled are dangerous, especially if serve they in positions of trust.

There are Simultaneous Lifestyle and Behavioral Changes

There are legitimate reasons an employee can suddenly develop the means to afford expensive vehicles or attire – it could be due to a significant other, an inheritance, or even the choice to use some of their savings on belongings.  However, if this is accompanied with behavior changes, such as higher stress levels and a less open personality, it might be a sign of wrongdoing.  This is especially true if they seem reluctant to take vacation or call in sick, as they may be covering up fraudulent activity while at work.

Beyond just refusing to take vacation, there are other signs that a manager is owning work so they can cover up fraud.  Do they insist on holding on to responsibilities that could easily be delegated to an employee?  Do they seem to hire poor quality staff, even if a different candidate demonstrates more competence during the hiring process?  Do they hold on to specific customer or vendor relationships and refuse to let others step in when they’re unavailable?  All of these are red flags for management fraud, which generally leads to substantially more losses than non-management fraud.

To learn how CMTS:HR can help your company close HR investigations faster and more efficiently, call us at 855-636-5361 or email us at Team_CMTSHR@CMTSHR.com.