Each year, the Ethics and Compliance Initiative conducts a study into the state of workplace conduct from the employee’s perspective.  This year’s study was released in May, and it contains a wealth of information for companies who want to better understand the employee’s experience in the workplace.  One of the most staggering statistics is that 44% of employees who reported bad behavior said it led to retaliation.  Furthermore, it happens very quickly – of those reporting retaliation, 72% said it happened within three weeks.

Part of the reason this number is so scary is that retaliation is twice as common as it was only four years ago.  It’s not because people’s motivations or intentions have changed that much in four years – in this age of data accessibility, it’s simply easier to learn about who reported your bad behavior.

An infographic in Popular Science named “Whistleblow While You Work” shows how easy it is to be caught in the act of reporting bad behavior.  Unfortunately the infographic isn’t provided online, but the thumbnail image below shows how careful an employee reporting misconduct has to be. 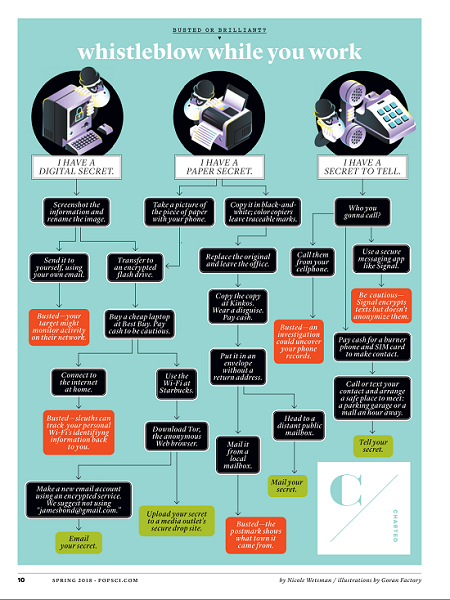 Here are some of the things it asks the employee:

Did you use email? If so, your employer might monitor network activity and discover that it was you who reported it.

Did you use your cellphone? If it’s an agency-issued cellphone, the records might be available.

If the evidence is a document, did you copy the document and print it on a color printer? If so, the printer may have left tiny marks identifying which printer was used.

After hearing news about all of the trouble the FBI has when accessing information on smartphones, many people assume that technology has made it much easier to stay anonymous. That’s only true for people who are experts in keeping information under wraps.  For the typical user, technology has made it much more difficult keep your identity private.  This is likely becoming apparent to employees who watch reporters of misconduct experience career-limiting retaliation, and it’s not going to increase their motivation to help expose bad behavior that increases liability and reduces employee morale.

This makes it more important than ever to help your employees retain their anonymity whenever possible.  Provide tip sheets in inconspicuous places that encourage reporting and explain how to do it anonymously. Provide an online submission system (which they are encouraged to use from a location outside of the company’s network) to report bad behavior to HR or another appropriate department in the company.  Also, make sure that your HR investigation systems aren’t accessible to people outside of the group.

To learn how CMTS:HR can help you reduce liability by increasing reports of bad behavior, call us at 855-636-5361 or email us at Team_CMTSHR@CMTSHR.com and ask about our HR investigations software.